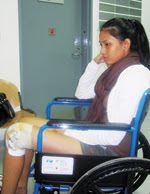 VietNamNet Bridge – The Vietnamese contestant for Miss Earth 2009 suffered from a serious sprain on her left leg after a fall on October 24. Doctors said she cannot move for at least ten days. It means that Truong Thi May will have to quit the Miss Earth pageant in the Philippines in November.

wheelAccording to the schedule, May will fly to the Philippine on November 1. Her photos have been posted on the pageant’s website already with nearly 90 other contestants.

On October 28, Elite Vietnam’s representative Thuy Hanh (the organisation holds the right to send Vietnamese contestant to the Miss Earth pageant), said that this is an unexpected accident.

“Besides May, we have some other nominees. We are awaiting the Performance Art Department’s decision,” Hanh said.